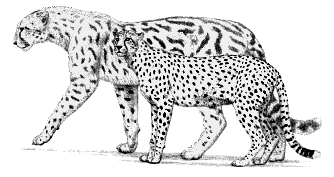 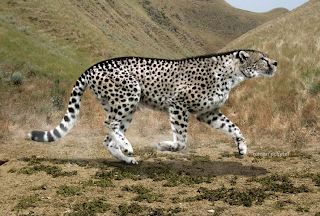 We can only guess what the Giant Cheetah may have looked like but it is guessed that it may have looked a bit like the king cheetah (shown on the bottom left), the king cheetah variant is caused when the genes that control coat color produce more black then it should giving the cheetah stripes on its back and spots that are fused together. (Having black in places were it shouldn't be is called Melanism, the opposite is Leucism, when white appears in spots were it shouldn't be. both can happen in every animal including people.) 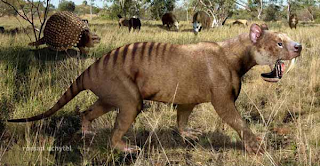 Thylacosmilus (thigh-la-coe-smile-us) was the last of the linage of saber toothed marsupials. (marsupials that looked like saber toothed cats) Despite it looking like a saber toothed cat their are key differences like the flanges on the lower jaw to protect the saber teeth, the incisors are missing all together because the canines became to big to have room for them, the molar teeth were quite small as well, and the canines never stopped growing throughout the animals life. 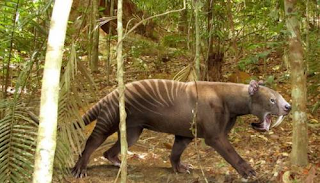 Thylacosmilus most likely hunted like smilodon by sinking its enlarged canines into the animals neck. The way Thylacosmilus ate is another matter. It is believed that Thylacosmilus' canines replaced the role of the incisors  by hooking its canines into the flesh and then polling away (kind of like using a knife) witch would have  sheared off chunks of flesh.