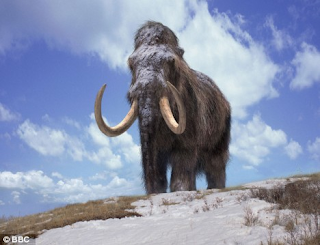 The Woolly Mammoth also known as the Tundra Mammoth was the largest member of the elephant family. Unlike their present day African relatives the Woolly Mammoth had a large number of Sebaceous glands (Su-bate-sh-us gl-ans) which secretes a greasy fat into their hair which helped to keep them warm. We have them too, it's what makes our hair feel oily. 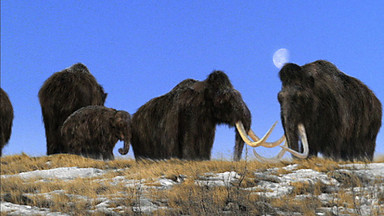 Mummified Woolly Mammoths have been found ever sense 1799. The most famous one is Lyuba, a baby female mammoth that is remarkably preserved, including her eyes and trunk. All her organs are intact and they even found traces of milk from her mother in her stomach. It is believed that she was 30-35 days old at the time of her death. 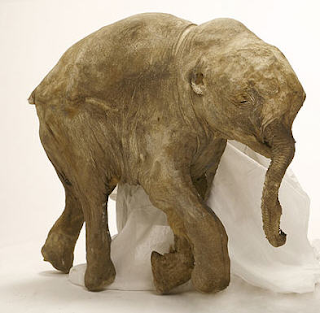 (A pride of Smilodon hunting a Toxodon)
Smilodon (Smile-o-don) or Saber Toothed Cat was the largest of the saber-tooth family. A common misconception is the name Saber-toothed tiger which is wrong because the Smilodon was not related to the tiger, and from cave paintings we know that they didn't have stripes, but a more plane coat like the lions and with large spots. It is now believed that the Smilodon most likely hunted in prides like lions do today and is widely accepted as fact sense their is enough evidence to support this clam from the Labrea Tar Pits and in cave paintings. It was once thought that Smilodon killed by inflicting deep wounds on the abdomen with the large canines it sported but tests revealed that was impossible do to the curvature of the canines (The bite wouldn't penetrate the skin). The canines were than used on the throat and they found that it made a quicker kill, (were the jugular vain is) and this turned out to work. A lion uses the "choke hold" which takes up to 5 minutes to kill the animal, The Saber-toothed cats method took less then 5 seconds to kill. 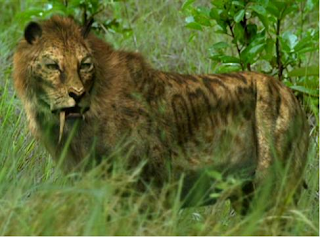