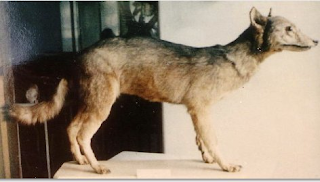 The Honshū (hon-shoe) Wolf was a very old subspecies to evolve in Japan. The predecessor (the gray wolf) might have migrated to Japan and evolved into the Honshū Wolf  1.7million years ago, but no one knows for sure. No one knows how or when the gray wolf got to Japan in the first place. 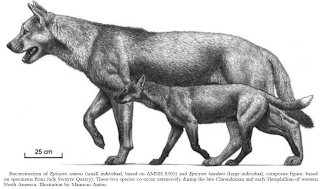 The Epicyon Haydeni (e-p-E-on hay-den-e) or Giant Hyena roamed North America for about 15.5 million years. Being over 3feet tall the
Giant Hyena was the largest of the canid (dog) family. No one knows why the Giant Hyena went extinct but its estimated that it was because their pray started to decline. In reality the Giant Hyena is not a hyena, its a giant dog, though it had cone like teeth like a hyena does, giving it its nickname. 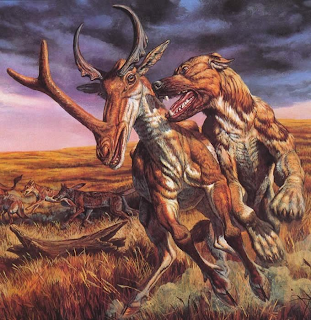 Like the gray wolf the Epicyon Haydeni most likely hunted in packs allowing them to take down their pray (in this case a synthetoceras (sin-thee-tow-sir-us)) faster and more effectively. If this dog were alive today it would pray on not only horses and sheep but us too. The Epicyon Haydeni was the last of the bone crushing linage of the dog family.